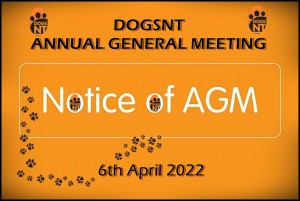 ◊ Nominations are being called for the following positions, for a two (2) year term of Office:

◊ Also being called for a term of twelve (12) months is the position of Alice Springs Zone Representative.

Nomination forms are to be in the hands of the Returning Officer no later than 5.00 pm Wednesday 2nd February 2022. Nominees are requested to include a short resume with their nomination, and if required, include the name of a financial nominated scrutineer

◊ AGENDA ITEMS – Business for inclusion on the Agenda must be in the hands of the Secretary no later than 5.00 pm Wednesday 2nd February 2022. The Agenda items are to clearly state the item to be discussed along with a short rationale on the item. Notices of Motion must be moved and seconded by financial members of Dogs NT.

♦  Nomination forms can be downloaded HERE and are also available from the Dogs NT Office.